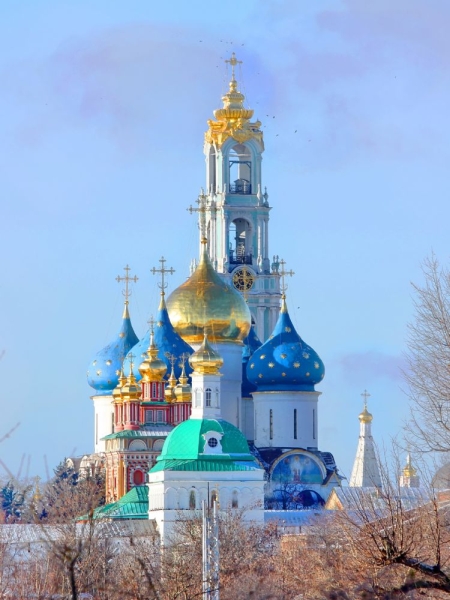 Short Description
In Russia there are only two Lavra in its vast territory: one in St. Petersburg, Alexander Nevsky, and the other in Sergiev Posad, near Moscow. Guests of the hotel "Zagorsk" are lucky: this largest center of Russian Orthodoxy is located nearby, just 15 kilometers away. Many of them specially stay at our hotel to get to this central attraction of the region.
Information for visitors
Address:
141300, Moscow region, Sergiev Posad, Holy Trinity Sergius Lavra
Phone:
+7 (496) 540-53-34
Website:
stsl.ru
Working hours:
08.00 - 17.00
Map location
Details and photos

In the olden days, the lavrons were the crowded monasteries, protected from invaders by powerful fortress walls. That title had to be earned. The Trinity-Sergius Monastery received this status by decree of the Russian Empress Elizabeth in 1742.

However, it was created long before this significant moment in his biography.

Historians have determined that the date of the foundation of the monastery can be considered 1337. It was at this time that Sergius of Radonezh, after many years of asceticism in solitude, appeared on the hill of Makovec, along with his brother Stephen, who joined him. They united with the inhabitants who came here and founded the Trinity-Sergius Monastery.

It was purely male from the beginning. On a small plot of land the brothers built a wooden church of the Holy Trinity, erected several cells.

The proper way of life, support for princely authority, and opposition to the Tatar-Mongol invaders made the monastery popular with all segments of the population. It was here, in 1380, that Abbot Sergius of Radonezh blessed the Moscow prince Dmitry Donskoy for the battle against the Golden Horde. The victory over the hordes of Mamay at Kulik Field was a turning point in the confrontation with the invaders.

Twelve years later, on September 25, 1392, the Venerable Sergius left this world and was buried by the walls of the temple he had founded.

The Tatar-Mongols took cruel revenge on the monastery for its opposition, and in 1408 it was burned down by Khan Yedigey. But nothing is ever empty. In 1422, in the same place where the burnt-out church stood, a new, stone Trinity Church was built. It was the first structure in the monastery made of stone.

The relics of St. Sergius were transferred into it. To decorate the walls and vaults of the temple were invited famous icon painters D. Black, A. Rublev, who created here his immortal creation “Holy Trinity”.

The monastery continued to enjoy the favor of Moscow princes, then the tsars. Here occurred the baptism in infancy of Ivan the Terrible, who subsequently frequently visited it for prayers, generously, in modern parlance, sponsored it.

In 1585 the construction of the Assumption Cathedral was completed. The economy of the Trinity-Sergius Monastery grew; the number of settlements increased, its own ships with goods traded with foreign countries, the monastery brickyard worked.

At all times it has been the center not only of the spiritual life of the people. During the wars with the Polish-Lithuanian invaders, the monastery was besieged for 16 months. The ranks of defenders were thinning, the walls were destroyed, but the temple-fortress did not let the enemy through.

Royalty and representatives of noble families were frequent guests at the Lavra. The Vorotynskys, Obolensky, Glinsky, Belsky, Godunovs, as well as many patriarchs and bishops are buried here.

After the revolution of 1917 came hard times for the inhabitants of the monastery. In April of the twentieth year, the last service was held. It was closed, a period of neglect began.

During the years of Soviet rule, many of the valuables stored in the Lavra were destroyed, and the church bells were dumped and melted down. In the nineties of the last century, the monastery ensemble after a series of restoration works began to acquire its usual appearance.

Now the renovated Trinity-Sergius Lavra attracts pilgrims and tourists for a variety of reasons. Some seek to pray and ask for help at the tomb of St. Sergius of Radonezh, others – to admire the beauty of the church architecture.

Let us name the most noteworthy temples on the territory of the Lavra:

Also of great interest is the family tomb of the Godunov family. It is located in a separate building on the territory of the monastery.

For members of the royal dynasty, specifically, Tsar Alexei Mikhailovich, who often came here with his large retinue, the Tsar’s Chateau was built. The two-story building was successfully assembled with the Church of the Intercession of the Mother of God. The original design of its facade also attracts the attention of visitors to the Lavra.

The central temple of the Lavra is the Holy Trinity Cathedral. Pilgrims and tourists, visitors to the monastery initially flock here. On the south side next to the iconostasis is a reliquary with the relics of Sergius of Radonezh.

The tomb is a work of skilled Russian masters-calvers, made in the 16th century by order of Ivan the Terrible.

In the five-tier iconostasis are ancient icons painted when the church was built. Among them are the already mentioned icon of the Holy Trinity, as well as the Savior Not Made by hands, and the Savior on the Throne by the master iconographer Simon Ushakov.

In the Serapion tent, the icon of the Appearance of the Mother of God to Sergius of Radonezh is of great interest. According to legend, it is placed in the same place where this miraculous event took place.

In the Cathedral of the Assumption, visitors can see the wooden coffin in which the relics of the late Sergius lay until 1585.

Trinity-Sergius Lavra has one achievement: it is here that the largest bell in Russia has been installed and operates in the local bell tower. The predecessor of the current one, weighed 65 tons. It was made by royal decree of Elizabeth Petrovna.

During the years of the anti-religious campaign of the Soviet authorities, this bell was dropped, it cracked on impact. In 2004, a new bell of even larger size, weighing 72 tons, was produced at the Baltic Shipyard. In May of the same year, it began to bring joy to Lavra and its surroundings.