Radonezh village Church of the Transfiguration 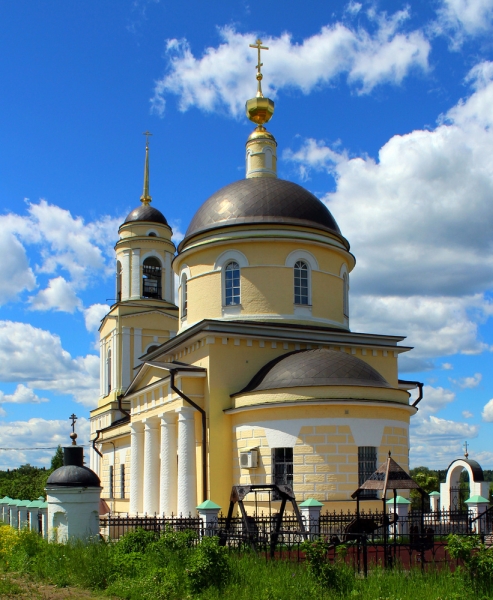 Short Description
A small Russian town Khotkovo, where the hotel "Zagorsk" is located, is located in the center of the territory, where each of the nearby villages is somehow associated with the history of our Motherland, the holy relics. One of them is Radonezh, one of the main attractions of the region. Guests of the "Zagorsk" recommend to visit this historic place. There is a beautiful church of the Transfiguration, a monument to St. Sergius of Radonezh, who spent most of his life in this region. Also in Radonezh, you can see the remains of the ancient fortifications that once protected the densely populated settlement. You can get to the village very quickly by car, driving only 9.6 km to your destination. During the trip you can admire the local picturesque landscapes, glorified in his works by famous artists V.D. Polenov, I.I. Levitan, M.V. Nesterov.
Information for visitors
Address:
Moscow region, Sergiev Posad urban district, Radonezh village
Phone:
+7 (916) 700-68-08
Website:
facebook.com/radonezhstsl
Working hours:
08:00–20:00
Map location
Details and photos

This place attracted the ancient inhabitants with its beautiful location. Here the trade routes crossed the Pazha River. Archaeological excavations near Radonezh prove that there were settlements here as early as the beginning of our era.

The first settlers in these places were Finno-Ugric tribes. Later, in the 11th century, they were displaced by the Slavs-Krivic. Their dwellings were guarded by mounds, field fortifications, the remains of which can be seen in the village. Radonezh received its name, Radonezh, in honor of the leader of the Slavic tribe, Radoneg.

Pereyaslavskaya road, which was popular in those days and connected such important cities of ancient Russia as Kiev, Rostov, Vladimir, and Suzdal, caused the appearance of a settlement here. The number of its inhabitants gradually increased, the town was at first part of the Rostov-Suzdal, and then the Moscow principality.

The conquerors, the Tatar-Mongols, did not pass Radonezh either. It was the place where the baskaks of the Golden Horde established their headquarters.

The first half of the 14th century was significant for the town. It began to play an important role in the life of the Moscow principality, as evidenced by the constant references to Radonezh in the letters written by Prince Ivan Kalita in the period 1328 – 1341.

Let us especially note the beginning of the fourteenth century. It was at this time that the family of the noble and pious boyar Kirill and his wife Mary moved here from Rostov, together with their son Bartholomew, later Sergius of Radonezh.

The city expanded over time and in 1410 became central to the county principality of Radonezh. But gradually its importance began to diminish, and under Ivan the Terrible Radonezh became an ordinary settlement. In addition, Polish detachments, raiding Russian lands, in the period from 1608 to 1610 years destroyed the city, devastated its inhabitants.

After these blows Radonezh did not recover, and in 1617 it was transferred to the Trinity-Sergius Monastery already in the status of the village, after which it became known as Gorodok. Radonezh did not regain its original name until 1989.

Despite the fact that now in the village is not much left, about three dozen buildings, there is something to see. Tourist groups and solo travelers are frequent guests of Radonezh.

The most significant landmark is the Church of the Transfiguration. It was built in 1836 – 1842, executed in a style typical of many Russian temples of the mid-nineteenth century. A refectory is attached to the western side of the church, and a three-tiered bell tower rises behind it.

The church is now open for worship and visits. On its walls you can see fragments of paintings of the seventies of the XIX century, as well as icons made by the hands of local artists of the same time.

In the southeastern part of the church there is a chapel of Sergius of Radonezh. This was the site of his family’s house many years ago. During his lifetime, Sergius became known for blessing the battle of Prince Dmitry Donskoy, who won the battle of Kulikovo.

He is also the founder of Trinity-Sergius Lavra. Venerable Sergius had miraculous powers that helped him heal even hopelessly ill people, as well as the gift of clairvoyance.

In memory of the wonderworker, a three-meter-high monument was erected near the church on May 29, 1988. Its opening was timed to coincide with the six hundredth anniversary of the repose of Sergius and the millennium of the Baptism of Russia.

There is a cross of wood and metal on the side of the temple. He stood on the grave at the burial of Matryona of Moscow, who helped and is still helping people heal from severe illnesses. Many visitors come here in order to touch it, to tell the holy old woman about their problems, “ailments.

Not far from the temple, by the Pazha River, there is a spring of St. Sergius. Here it is convenient to draw healing water and pray at the font. Next to it you can see the work of the original mill.

The remains of the ancient ramparts can be seen on the outskirts of Radonezh. Next to them are the graves of the local cemetery.