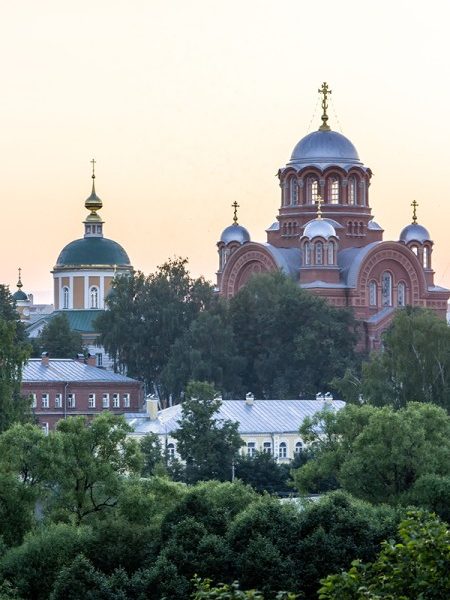 Short Description
Guests of the hotel "Zagorsk" in Khotkovo will certainly be interested in the main attraction of the city: the Intercession Stavropigialny female monastery. It has the status of stauropegial, which is rare for such churches. Translated into plainer language, this means that the monastery is subordinate only to the patriarch himself; he may not carry out the instructions of the local diocesan authority. Such status is granted to churches in which the cross in the altar is placed personally by the patriarch. There are only 28 such churches in Russia, one of which is the Holy Protection Nunnery in Khotkovo.
Information for visitors
Address:
141370, Russia, Moscow Region, Sergiev Posad District, Khotkovo, Cooperativnaya str.
Phone:
+7 (496) 543-000-5
Website:
https://khotkovmonastery.ru/
Working hours:
06:00–21:00
Map location
Details and photos

This is one of the oldest monasteries in Russia. The date of its creation is unknown, but the first mention of it occurs in a document dating back to 1308.

The main local relic is the relics of the father and mother of St. Sergius of Radonezh, Cyril and Mary. Here they took monastic vows and were buried there. A large number of pilgrims from all over Russia and abroad come here to the Pokrovsky Stavropigial Monastery to worship the shrine.

The nunnery became female not immediately, but only in the first half of the 16th century. Its main cathedral was the wooden Church of the Intercession. Initially, the monastery led a meager existence. Only after it was handed over to the Trinity-Sergius Lavra did things get better for its residents. In 1580 was also built of wood Nicholas Church, named in honor of Nicholas the Wonderworker.

However, in the 16th century, as a result of raids by Polish-Lithuanian forces, the monastery was devastated. The nuns managed to hide behind the walls of the Lavra in Sergiev Posad from enemy invaders. The situation stabilized in 1648, and from that time the Holy Protection Nunnery began to revive. It was then that the first structure made of stone was erected on its territory – the new Church of the Intercession.

The monastery became independent, ceasing to be dependent on the Lavra in 1764. At the end of the 19th and beginning of the 20th centuries there was a hospital, an icon workshop, an almshouse, and a school. Nuns could sell their produce grown on their own plots or made by hand at the marketplace near the monastery.

Shortly after the revolution, in 1922, the Pokrovsky Monastery was closed. Nearly seven decades later, in 1989, it resumed its work.

The grandeur of church architecture

This majestic red-brick building of the central Pokrovsky Cathedral, standing on the bank of the Pazha River, is visible from afar. It is of great interest to tourists, both from the outside and the inside.

It is also worth seeing other temples of the monastery: St. Nicholas Cathedral, the Gateway Church of St. John the Baptist and St. Mitrofan of Voronezh, and small chapels.

Both main cathedrals, Pokrovsky and Nikolsky, were more than once rebuilt. They differ from each other in architecture. Thus St. Nicholas Church became the first in Russia, made in the Byzantine style.

The entrance to the monastery is through the Holy Gate, a monumental structure. Above them rises the gate church of John the Baptist.

We would like to remind the residents of the hotel “Zagorsk”, wishing to visit this attraction Khotkovo about one tradition adopted in the monastery. The visit should begin with the main local shrine, the relics of the parents of St. Sergius of Radonezh. Many pilgrims come to Khotkovo specifically to ask in this holy place to solve their pressing problems of settling their families, getting married, getting rid of the disease, etc.

Of great interest to pilgrims and visitors is an icon of the Sergiev family. It is placed over the tomb with the relics of the elder’s parents. On it you can see the farewell at the burial of the father and mother of Sergius of Radonezh himself, as well as his brothers and associates Stephen and Peter with their wives Anna and Catherine, and grandson Theodore.

Currently, a spiritual library is open to all comers on the territory of the Pokrovsky monastery, and a boarding house for girls is in operation.