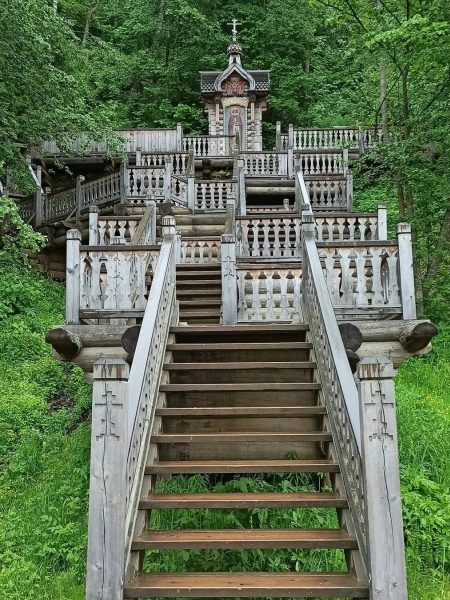 Short Description
Guests of the Hotel Zagorsk who wanted to see a real waterfall were lucky. They can look at such a miracle of nature without having to leave our country. All they need to do is to visit Gremyachiy Klyuch. This waterfall, located in the Moscow region east of Sergiev Posad, is well known to Russian and foreign tourists. You can reach it by car from Khotkovo in just half an hour. The nearest settlements Vzglyadnevo, Botovo and Lyapino, as well as a small river Vondiga will be a reference point for its location. This natural spring, or rather a few springs coming to the surface from the bowels of the earth, has medicinal properties. Many tourists come here from all over the country and from abroad in order to heal their illnesses and just to admire the local beauty.
Information for visitors
Address:
Moscow Region, Sergiev Posad City District, Bereznyakovsky Territorial Department
Phone:
+7 (965) 441-00-33
Website:
https://www.gremyachiy.ru/
Working hours:
24/7
Map location
Details and photos

According to legends, this spring arose at the request of the miracle worker Sergius of Radonezh. Once upon a time in the fourteenth century, the saint, together with his disciple Roman of Kirzhach, wandered through the lands near Moscow to find a secluded place of prayer, which would help to deliver the Russian land from the Tatar-Mongol yoke.

As they passed through these lands they were thirsty. Sergius prayed, struck the ground with his staff, and life-giving water flowed out of it.

The fame of this holy spring spread throughout the Russian land. Pilgrims began to flock here from different parts of the country, wishing to solve their painful problems with the help of healing water. Currently, Gremyachii Klyuch is visited by about 3 thousand tourists a year.

The name “rattlesnake” of this waterfall is quite clear. The water rushes noisily out of the ground and plummets down the slope.

There is also another version of its origin. The ancient Russians called springs formed as a result of a lightning strike “Gremyachimi”.

Different information sources publish conflicting data about the height of the Gremyachii Klyuch waterfall: from 10 to 20 meters. The most reliable parameter for the height of falling water is considered to be 13 meters. In any case, the spring is an impressive sight.

There are also discrepancies in the number of springs that come out of the ground. This fact is quite understandable: in different years the number of fonts, in which it was possible to draw water, varied.

Visiting pilgrims and tourists sacredly believe that the spring is healing. They cite various stories to prove it. They talk about the cure of taking the healing fluid for migraine, hypertension. Healing water, the story goes, also helps to get rid of arrhythmia, promotes healing of cuts and wounds.

Regardless of the veracity of these stories, the following can be said. The purest natural water, a wonderful atmosphere reigning around the waterfall definitely contributes to at least raise your spirits, charging for a long time cheerfulness and optimism.

However, visitors of Gremyachy Klyuch should be warned: the underground waters have a consistently low temperature at any time of year, only +6 degrees. Therefore, to drink immediately cooled liquid should be carefully, despite the fact that it is considered healing.

It is also necessary to remember the old folk wisdom: “much is good – can be bad. The properties of groundwater are not yet fully understood. While for most visitors they are useful, for someone the excessive use of this liquid can be detrimental.

In any case, a trip here for guests of the hotel “Zagorsk” will not be in vain. In addition to the amazing water, which you can take with you without restriction, you can have a great photo shoot here. Cozy lawns located around the waterfall, the picturesqueness of the surrounding landscape disposes to it.

The spring was equipped in the middle of the twentieth century. Prior to this, the waterfall descended from the top by gravity, on a limestone slope. Now the design allows you to conveniently approach any of the fonts, to fill the water.

In the beginning there were the usual wooden bridges, which often flooded, were inconvenient to approach the water. In the late nineties, stairs were built to facilitate access. There was also built an upper observation deck, erected a casket with several icons.

The Svyatogory complex, as pilgrims also call it, looks great. Famous Russian architects worked on its creation. Everything here is made for the convenience of dialing wonderful water. The streams of the waterfall descend into the fonts in the arranged troughs.

Pilgrims and visitors can be seen here at any time of year. The spring does not freeze even in the winter cold, does not change the temperature of the streams. Guests arrive at the holy water in groups and individually, the access to the waterfall here is not limited.

After visiting Gremyachy Klyuch, tourists can take a convenient path to Sergiy Radonezhsky Church or, on the way there, to the more modest Church of the 40 Martyrs of Sebastian.