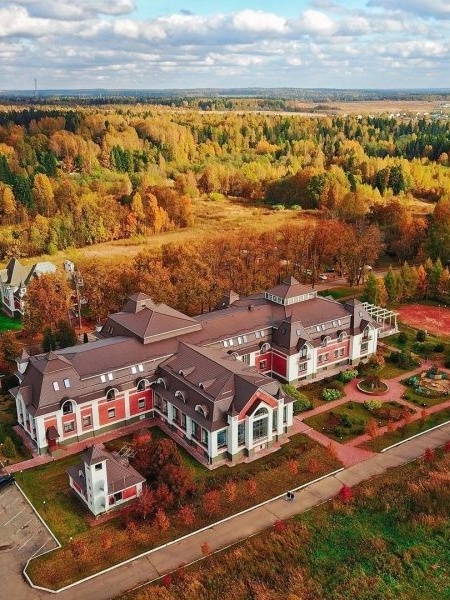 Short Description
Not far from the hotel "Zagorsk", just six kilometers, is well known not only in Russia but also beyond its borders, Abramtsevo Estate. This museum-reserve of federal importance is located in a picturesque place on the bank of the Vora River. In addition to the beautiful nature of this corner is remarkable for the many tourists that in different years lived here and worked famous writers and artists, theater and public figures of Russia. Currently, in various buildings of the estate you can see paintings, sculptures, household items of bygone centuries, created by remarkable masters.
Information for visitors
Address:
Moscow region, Sergiev Posad district, Abramtsevo village, 1 Museinaya str.
Phone:
+7 (496) 543-24-70, +7 (916) 278-45-42, +7 (495) 993-00-33
Website:
abramtsevo.net
Working hours:
Wed-Fri 10:00-18:00; Sat 10:00-20:00; Sun 10:00-18:00
Map location
Details and photos

The first mention of Abramkov (as the village was called in the old days) dates back to the 16th century. The owner of the estate at the time was the landowner Volynsky. A picturesque place near Moscow attracted famous people of Russia. At different times the owners of the estate were F. I. Golovin, L. V. Molchanov, and V. V. Nevedomski.

In 1843, the famous writer S.T. Aksakov purchased the estate. From this moment Abramtsevo begins a new countdown in its history. It was here that the passionate hunter, lover of rural life, created many famous stories, fairy tales, among which can be called a popular among children of different generations of “The Scarlet Flower.

Among the guests of Sergei Timofeyevich were many famous personalities. The names of Shchepkin MS, Gogol NV, Turgenev I S, Pogodin MP speak for themselves.

Abramtsevo was gradually becoming a famous place in the circle of people belonging to the Russian high society of the 19th century.

This was one of the reasons for the purchase of the estate in 1870 by a major industrialist and philanthropist, S. I. Mamontov. In addition to his business acumen, Savva Ivanovich had a creative nature, and in his spare time he himself took part in amateur productions. He was his own man in the circle of artists, theaters, and writers.

By this time, after Aksakov’s death, the estate had fallen into disrepair. The stoves, walls, and roof were in ruins, and a new foundation had to be installed. Mamontov took up the cause and revived the homestead with his own enthusiasm.

His wife, Elizaveta Grigorievna Mamontova, was a great help to him in this. She was the soul of the cultural center that formed in Abramtsevo. This woman and her friend, the artist Polenov’s sister Elena Dmitrievna, were the organizers of the school, carpentry and pottery workshops that made Abramtsevo famous throughout Russia.

Summer holidays in the countryside were very popular with famous artists of the time. At different times here lived, created, just came to rest Ilya Repin and Vasnetsov, V. Polenov and V. Serov, K. Korovin and M. Nesterov, M. Vrubel and F. Chaliapin, I. Levitan and A. Vasnetsov, as well as other creative personalities.

After the revolution of 1917 Abramtsevo received the status of a museum-reserve. Alexandra Savvichna, Mamontov’s daughter, became its first director. The farmstead continued to attract creative people like a magnet. Artists and sculptors of the Soviet period came here and created their masterpieces: V. I. Mukhina, I. E. Grabar, P. P. Konchalovsky and others.

Nowadays Abramtsevo is a literary and historical-art museum-reserve.

Interesting things are nearby

Now Abramtsevo looks the same as it did many decades ago, when celebrities strolled along the paths of the estate. It preserved the aura that attracted creative people of different generations.

When you close your eyes, you can imagine the active Mamontov rushing about the estate, Vasnetsov and Serov discussing their works, and Chaliapin strolling about, leaning on his invariable cane.

The museum has preserved many, about 25 thousand items, exhibits of great interest to lovers of painting and sculpture, applied art. There are also interesting archives of the former owners of the estate and their guests.

In addition, in Abramtsevo it will be interesting to look at the buildings, preserved in the same form in which they were built. The restoration has not changed their appearance at all.

In the room of the people’s room, as well as in the former kitchen, built in 1870, is now a small museum of folk life. Here you can see household items, carved furniture, feel the atmosphere of the past.

On the walls of the studio (1873) – hanging paintings, sketches by Vrubel, Serov, Vasnetsov, other authors, including the famous “Alyonushka” created by Viktor Vasnetsov in Abramtsevo by the pond.

The central exhibit here is a large portrait of Vera, the beloved daughter of S. I. Mamontov, painted by Valentin Serov, a friend of the estate owner. Opposite, under the glass fence, her dress, in which she posed for a painter in the garden.

The main manor house is filled with examples of nineteenth-century furniture made in a local workshop. The walls, the free space in the rooms are filled with paintings, sculptures, of great interest to lovers of beauty.

Here, on the territory of the estate, there is also the Polenov House (built in 1882), built for Mamontov’s friend the artist Vasily Dmitrievich Polenov and his family. Here he created his works, which to this day delight fans of painting.

The same Vasnetsov, a frequent guest of Abramtsevo, designed a hut on chicken legs (1883), built by local craftsmen. It looks exactly like the house from our favorite fairy tales, where Baba Yaga lived: thick timbers, holding the same strong walls, a roof over the entrance, covered with straw, a carved ridge.

When visiting the estate, you must go to the Church of the Savior Not Made by hands, located on the territory of the museum-estate. It was created in 1881-82 and is an authentic example of Russian temples of the late XIX century. The church was made according to the designs of artists V. Polenov and V. Vasnetsov. Inside – a mosaic floor, sketches for which were sketched by Vasnetsov, by the wall – the stove, designed by M. A. А. Vrubel.

To the left of the church is a family grave, where the last owners of the estate, the Mamontovs, are buried: Savva Ivanovich himself, his wife Elizabeth Grigorievna, children: Vera, Andrey, and grandson Sergei.